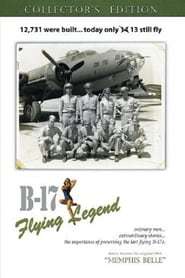 B-17 Flying Legend examines the importance of World War II's most famous airplane, and raises awareness about the importance of keeping the remaining B-17s flying for generations to come. This documentary covers the history of the airplane, from early designs to the outbreak of war, and the stories of bravery behind the faces of the men who flew them. It contrasts the past by also focusing on today's struggles to keep these flying museums in operation. Unless awareness is created to help with this preservation, in the near future B-17s will only be found in static displays. Almost 13,000 B-17s were built during the war. Sixty years later only 13 still fly. It is important to capture the history of the men behind these flying machines while they are still alive. It is also important to capture images of these machines while they still exist.

How To Watch B-17 Flying Legend