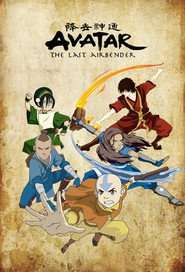 Avatar: The Last Airbender is an American animated television series that aired for three seasons on Nickelodeon from 2005 to 2008. The series was created and produced by Michael Dante DiMartino and Bryan Konietzko, who served as executive producers along with Aaron Ehasz. Avatar: The Last Airbender is set in an Asian-influenced world wherein some are able to manipulate the classical elements by use of psychokinetic variants of Chinese martial arts known as "bending". The show combined the styles of anime and American cartoons, and relied on the imagery of various East-Asian, Inuit, Indian and South-American societies. Due to this style, the series regularly enters the conversation regarding its consideration as an anime work. The series follows the adventures of protagonist twelve-year-old Aang and his friends, who must bring peace and unity to the world by ending the Fire Lord's war against the other three nations. The pilot episode first aired on February 21, 2005 and the series concluded with a widely praised two-hour episode on July 19, 2008. The show is obtainable from various sources, including DVD, the iTunes Store, the Zune Marketplace, the Xbox Live Marketplace, the PlayStation Store, Netflix Instant Play, and the Nicktoons Network.

How To Watch Avatar: The Last Airbender