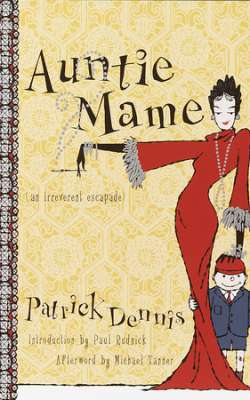 With a wit as sharp as a vodka stinger and a heart as free as her spirit, Auntie Mame burst onto the literary scene in 1955 -- and today remains one of the most unforgettable characters in contemporary fiction.

Wildly successful when it was first published in 1955, Patrick Dennis’ Auntie Mame sold over two million copies and stayed put on the New York Times bestseller list for 112 weeks. It was made into a play, a Broadway as well as a Hollywood musical, and a fabulous movie starring Rosalind Russell. Since then, Mame has taken her rightful place in the pantheon of Great and Important People as the world’s most beloved, madcap, devastatingly sophisticated, and glamorous aunt. She is impossible to resist, and this hilarious story of an orphaned ten-year-old boy sent to live with his aunt is as delicious a read in the twenty-first century as it was in the 1950s.

Follow the rollicking adventures of this unflappable flapper as seen through the wide eyes of her young, impressionable nephew and discover anew or for the first time why Mame has made the world a more wonderful place . . .