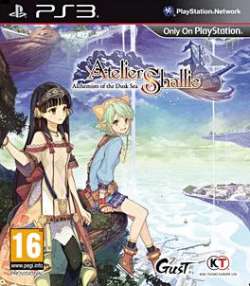 Atelier Shallie: Alchemists of the Dusk Sea is a Japanese role-playing video game developed by Gust. As part of the "Atelier" series of games, it is the third and final installment of the "Dusk" storyline. The game's story takes place about 10 years after the beginning of Atelier Ayesha: The Alchemist of Dusk and 6 years after the beginning of Atelier Escha & Logy: Alchemists of the Dusk Sky. The player is able to choose to play as one of two characters, each with a differing storyline and adventure; regardless of which character is chosen, the flow of the game remains the same. In comparison to previous Atelier games, fields are significantly larger, and the player is able to harvest a wider variety of items and raw materials to use for mixing.