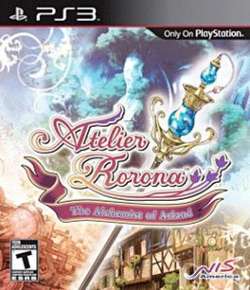 Atelier Rorona: The Alchemist of Arland

Atelier Rorona: The Alchemist of Arland is a Japanese role-playing video game developed by Gust. Atelier Rorona is the eleventh installment in the Atelier series, and it is the first title in the series to be developed for PlayStation 3, and it is also the first to utilize 3D models as opposed to the 2D sprites in earlier titles. Atelier Rorona's storyline is presented as a series of twelve tasks. Each of these tasks amounts to three months of the game's storyline and requires the player to complete it by the end of the period. The game has four main modes of gameplay: a field map, a battle screen, an alchemy system, and a visual novel system.