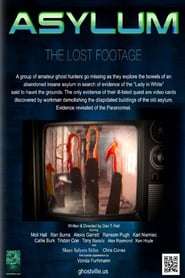 A group of amateur ghost hunters go missing as they journey into the bowels of an abandon Insane Asylum in a search for evidence of the 'Lady in White' said to haunt the grounds. The only evidence of their quest of no return are video cards discovered by workman as they demolish what's left of the vacant structures. Some of the footage was salvageable and reveals the missing ghost hunters fate as they traverse into the unknowns of the Asylum