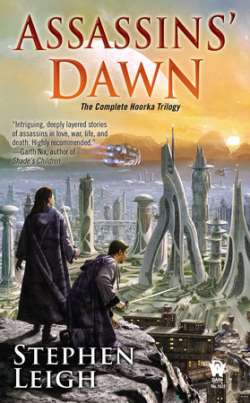 Neweden is a world whose gods are death and fate, and it’s here that the Hoorka have arisen: a guild of assassins, whose single law is that the victim must always retain a tiny but finite chance of escape. If the victim can survive until dawn, they may go free.

But the rich and powerful don’t care to have their will thwarted, and so the Hoorka must deal with the consequences of their own ethics. Gyll, the leader of the Hoorka, also has dreams of taking the guild offworld into the growing society of the Alliance, which is trying to reconstruct a shattered, worlds-spanning empire. Is that dream a genuine possibility, or will exposure to other cultures doom the Hoorka entirely?

Gyll must confront internal struggles within his own people, the dangerous politics of Neweden, and the twinned threat and promise of the Alliance. The Hag of Death dances around them, mockingly. Can the Hoorka survive to see the dawn of their own success, an Assassins’ Dawn?