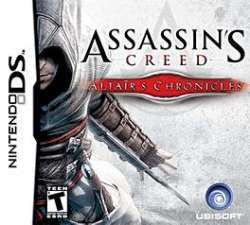 It is a prequel to the 2007 video game Assassin's CreedI t features two new cities, Tyre and Aleppo; and the three original cities, Jerusalem, Acre, and Damascus; but does not include Masyaf. Unlike the original Assassin's Creed, the game is not told through the perspective of Desmond Miles, but rather the perspective of Altaïr Ibn-La'Ahad, although the menu screens do take place in the Animus.