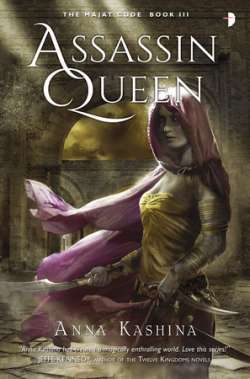 Defeated by the Majat forces, Nimos and the other Kaddim Brothers retreat to their secret fortress in the southern mountains. Nimos knows that the Majat’s victory is only temporary: during the flight, he managed to place a mark on Kara, one of the top-ranked Diamond Majat. His mind magic would now allow him to use this mark to confer her fighting skill to the Kaddim warriors and turn her loyalties to their side.

The new Majat Guildmaster, Mai, is planning a march against the Kaddim. His key ally, Prince Kyth Dorn, is instrumental in these plans: Kyth’s magic gift can protect the Majat against the Kaddim mind control powers. But Mai and Kyth are having trouble getting over their rivalry for Kara’s affections – even after they realize that this rivalry is the least of their worries, at least for the moment. Something about Kara is not right…