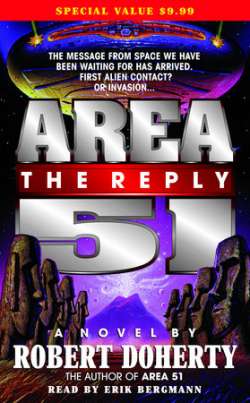 Area 51 was the most secret place in America.  But it was only one piece in a puzzle that stretched from Egypt's Pyramids to the mysterious face on Mars...

Part of a plan begun 5,000 years ago by those who had been here before.  And are coming back.

When scientist Lisa Duncan and Special Forces officer Mike Turcotte uncovered the stunning truth about Area 51--a "training area" on Nellis Air Force Base in Nevada--they opened up a Pandora's box kept hidden from the American public for fifty years.

What they uncovered explained decades of UFO sightings--and the most baffling mysteries of history from the Great Pyramid to Easter Island.

But these findings were only the beginning. Now a signal had come in from outer space: our first contact with extraterrestrials. The message said they were coming. It didn't say they had been here before...and left something behind. But what waited deep within the Rift Valley of Ethiopia and inside an ancient Chinese tomb would determine Earth's fate. The dawning of a new age.  Or the destruction of us all...


Robert Doherty is a pseudonym for a bestselling writer of military suspense thrillers. He is also the author of Area 51 and The Rock, and is currently working on a third novel in the Area 51 series, entitled Area 51: The Mission.