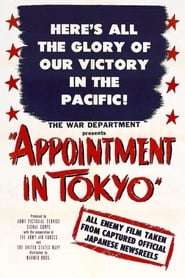 Produced by the Army Pictorial Service, Signal Corps, with the cooperation of the Army Air Forces and the United States Navy, and released by Warner Bros. for the War Activities Committee shortly after the surrender of Japan. Follow General Douglas MacArthur and his men from their exile from the Philippines in early 1942, through the signing of the instrument of surrender on the USS Missouri on September 1, 1945

How To Watch Appointment in Tokyo