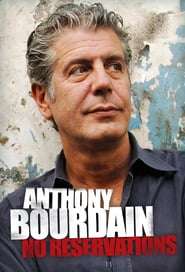 Anthony Bourdain: No Reservations was an American travel and food show on the Travel Channel; it also airs on the Discovery Travel & Living channel around the world. In it, host Anthony Bourdain visits overseas countries, cities worldwide, and places within the U.S., where hosts treat him to local culture and cuisine. The series premiered in 2005 on the Travel Channel. The format and content of the show is similar to Bourdain's 2001?2002 Food Network series, A Cook's Tour. The Travel Channel announced that season 9 will be the show's final season. Season 9 premiered on September 3, 2012 and concluded with its series finale episode on November 5, 2012. The special episode Anthony Bourdain in Beirut that aired between Seasons 2 and 3 was nominated for an Emmy Award for Outstanding Informational Programming in 2007. In 2009 the series won the Emmy for "Outstanding Cinematography For Nonfiction Programming".

How To Watch Anthony Bourdain