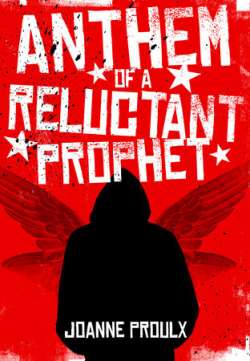 Anthem of a Reluctant Prophet

“Joanne Proulx’s debut novel is an impressive literary feat. Anthem of a Reluctant Prophet is a pitch-perfect glimpse of that powerful yet paradoxically fragile moment in adolescence when the world is rushing at you and you are rushing at it.”—Katharine Weber, author of Triangle

“Proulx is . . . a talented inhabitor of people unlike herself . . . every new writer so blessed should be cherished.”—Toronto Star

“A narrative rippling with the author’s insight slyly encoded in the hormone itch and cooler-than-thou posturing of a mixed-up teen. . . . Beguiling.”—The Globe and Mail

"A contemporary coming of age story that feels authentic to its times. It has some rough language and doesn’t shy away from depicting the kinds of things that a lot of teens do—in other words, they’re not squeaky clean the way the kids are in the Stephenie Meyer Twilight books….what I like about Proulx’s writing is that, throughout the book, the reader never quite knows where she’s going with the various elements of her plot, yet once we get to where she takes us, it all makes perfect sense. And boy, does she get the voice right. Highly recommended.”—Charles de Lint for Fantasy & Science Fiction

When seventeen-year-old Luke Hunter foretells the death of his friend with freakish accuracy, his life gets complicated. Everyone in Stokum, Michigan, his rank little pinprick of a hometown, knows about the premonition and wants to know more. But Luke holds everyone—the local news crew, his parents, his buddy Fang—at arm’s length, telling no one that the death premonitions keep happening. Terrified, he lurches through a personal minefield studded with previously unconsidered existential ponderings, Christian fundamentalists, and a dream girl who his dead friend left behind. Anthem of a Reluctant Prophet is a darkly comic coming-of-age novel that nails contemporary youth culture.

Joanne Proulx’s short stories have been published in literary magazines on both sides of the Atlantic. Anthem of a Reluctant Prophet is her first novel. She lives in Ottawa, Canada.