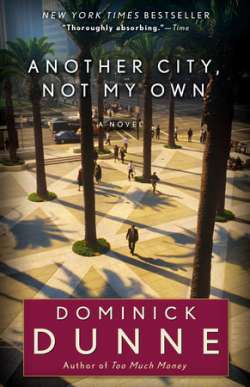 Another City , Not My Own

This is the story of the Trial of the Century as only Dominick Dunne can write it. Told from the point of view of one of Dunne's most familiar fictional characters-Gus Bailey-Another City, Not My Own tells how Gus, the movers and shakers of Los Angeles, and the city itself are drawn into the vortex of the O.J. Simpson trial.

We have met Gus Bailey in previous novels by Dominick Dunne. He is a writer and journalist, father of a murdered child, and chronicler of justice-served or denied-as it relates to the rich and famous.  Now back in Los Angeles, a city that once adored him and later shunned him, Gus is caught up in what soon becomes a national obsession. Using real names and places, Dunne interweaves the story of the trial with the personal trials Gus endures as he faces his own mortality.

By day, Gus is at the courthouse, the confidant of the Goldman and Simpson families, the lawyers, the journalists, the hangers-on, even the judge; at night he is the honored guest at the most dazzling gatherings in town as everyone-from Kirk Douglas to Heidi Fleiss, from Elizabeth Taylor to Nancy Reagan-delights in the latest news from the corridors of the courthouse.