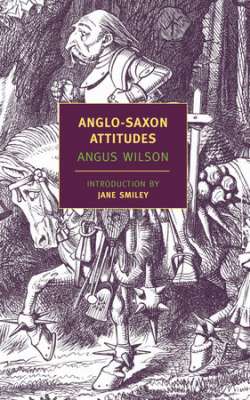 Gerald Middleton is a sixty-year-old self-proclaimed failure. Worse than that, he’s "a failure with a conscience." As a young man, he was involved in an archaeological dig that turned up an obscene idol in the coffin of a seventh-century bishop and scandalized a generation. The discovery was in fact the most outrageous archaeological hoax of the century, and Gerald has long known who was responsible and why. But to reveal the truth is to risk destroying the world of cozy compromises that, personally as well as professionally, he has long made his own.

One of England's first openly gay novelists, Angus Wilson was a dirty realist who relished the sleaze and scuffle of daily life. Slashingly satirical, virtuosically plotted, and displaying Dickensian humor and nerve, Anglo-Saxon Attitudes features a vivid cast of characters that includes scheming academics and fading actresses, big businessmen toggling between mistresses and wives, media celebrities, hustlers, transvestites, blackmailers, toadies, and even one holy fool. Everyone, it seems, is either in cahoots or in the dark, even as comically intrepid Gerald Middleton struggles to maintain some dignity while digging up a history of lies.