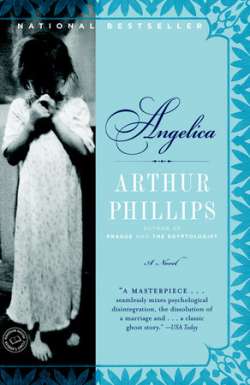 BONUS: This edition contains excerpts from Arthur Phillips's The Tragedy of Arthur, The Song Is You, Prague, and The Egyptologist.

From the bestselling author of The Egyptologist and Prague comes an even more accomplished and entirely surprising new novel. Angelica is a spellbinding Victorian ghost story, an intriguing literary and psychological puzzle, and a meditation on marriage, childhood, memory, and fear.

The novel opens in London, in the 1880s, with the Barton household on the brink of collapse. Mother, father, and daughter provoke one another, consciously and unconsciously, and a horrifying crisis is triggered. As the family’s tragedy is told several times from different perspectives, events are recast and sympathies shift.
In the dark of night, a chilling sexual spectre is making its way through the house, hovering over the sleeping girl and terrorizing her fragile mother. Are these visions real, or is there something more sinister, and more human, to fear? A spiritualist is summoned to cleanse the place of its terrors, but with her arrival the complexities of motive and desire only multiply. The mother’s failing health and the father’s many secrets fuel the growing conflicts, while the daughter flirts dangerously with truth and fantasy.

While Angelica is reminiscent of such classic horror tales as The Turn of the Screw and The Haunting of Hill House, it is also a thoroughly modern exploration of identity, reality, and love. Set at the dawn of psychoanalysis and the peak of spiritualism’s acceptance, Angelica is also an evocative historical novel that explores the timeless human hunger for certainty.

“Angelica, Arthur Phillip's spellbinding third book, cements this young novelist's reputation as one of the best writers in America, a storyteller who combines Nabokovian wit and subtlety with a narrative urgency that rivals Stephen King"  –Washington Post