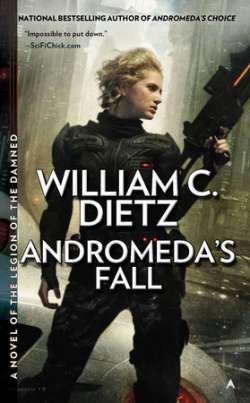 Hundreds of years in the future, much has changed. Advances in medicine, technology, and science abound. Humanity has gone to the stars, found alien life, and established an empire. But some things never change...

All her life, Lady Catherine Carletto—Cat—has lived for the next party, the next lover, the next expensive toy. Until, in a bloodthirsty power grab, Imperial Princess Ophelia and her cadre of synth assassins murder her brother, the emperor, and go on to purge the galaxy of his friends and allies—including Cat’s family.

Now Cat is on the run. And, like countless others before her, she finds sanctuary among the most dangerous of society’s misfits—the Legion. Cat becomes Andromeda McKee: a woman with a mission—to bring down Empress Ophelia—or die trying.