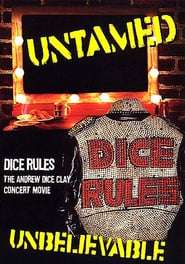 Outrageous, misogynistic and vulgar-to-the-max comedian Andrew Dice Clay does his stuff in this combination stand-up concert video and series of comedy sketches. The sketches, demonstrating that The Dice Man used to be a klutzy wimp, begin the film which then jumps into a filled-to-capacity performance at Madison Square Gardens. The film contains strong profanity, blatant racist remarks, graphic references to sex and other "adult" subjects.