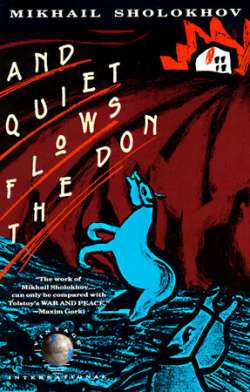 And Quiet Flows the Don

WINNER OF NOBEL PRIZE IN LITERATURE, 1965

Mikhail Sholokhov’s groundbreaking epic novel gives a sweeping depiction of Russian life and culture in the early 19th century. In the same vein as War and Peace, by Leo Tolstoy, And Quiet Flows the Don gives readers a glimpse into many aspects of Russian culture, and the choices a country makes when faced with war and destruction.

In his enormous epic of Cossack life during the Revolution...Mikhail Sholokhov has achieved even greater power, sustained narrative gift and stirring human truthfulness.”—New York Times

“In addition to its panoramic grandeur, the wealth of its characters and its historic realism, Sholokhov's book is memorable for its portrayal of the primitive and already almost legendary life of the Don Cossacks.”—Malcolm Cowley, New Republic