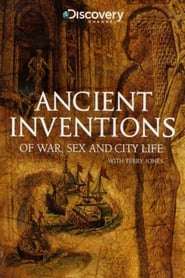 Ancient Inventions was a BBC historical documentary series released in 1998. It was presented by ex-Monty Python member Terry Jones and looked at great inventions of the ancient world. The series is split into 3 episodes, namely City Life, Sex and Love, and War and Conflicts, all around 50 min long.