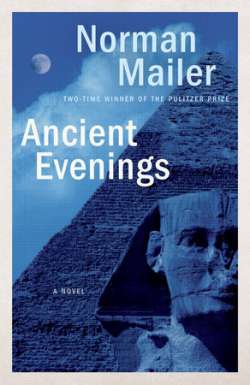 Norman Mailer’s dazzlingly rich, deeply evocative novel of ancient Egypt breathes life into the figures of a lost era: the eighteenth-dynasty Pharaoh Rameses and his wife, Queen Nefertiti; Menenhetet, their creature, lover, and victim; and the gods and mortals that surround them in intimate and telepathic communion. Mailer’s reincarnated protagonist is carried through the exquisite gardens of the royal harem, along the majestic flow of the Nile, and into the terrifying clash of battle. An extraordinary work of inventiveness, Ancient Evenings lives on in the mind long after the last page has been turned.

“Mailer makes a miraculous present out of age-deep memories, bringing to life the rhythms, the images, the sensuousness of a lost time.”—The New York Times

“Mailer’s Egypt is a haunting and magical place. . . . The reader wallows in the scope, depth, the sheer magnitude and—yes—the fertility of his imagination.”—The Washington Post Book World

“[Norman Mailer] loomed over American letters longer and larger than any other writer of his generation.”—The New York Times

“A writer of the greatest and most reckless talent.”—The New Yorker

“Mailer is fierce, courageous, and reckless and nearly everything he writes has sections of headlong brilliance.”—The New York Review of Books

“The largest mind and imagination [in modern] American literature . . . Unlike just about every American writer since Henry James, Mailer has managed to grow and become richer in wisdom with each new book.”—Chicago Tribune

“Mailer is a master of his craft. His language carries you through the story like a leaf on a stream.”—The Cincinnati Post