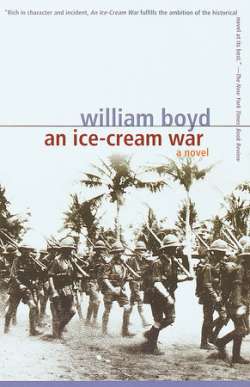 "Rich in character and incident, An Ice-Cream War fulfills the ambition of the historical novel at its best."
--The New York Times Book Review

"Boyd has more than fulfilled the bright promise of [his] first novel. . . . He is capable not only of some very funny satire but also of seriousness and compassion."  --Michiko Kakutani, The New York Times

1914. In a hotel room in German East Africa, American farmer Walter Smith dreams of Theodore Roosevelt. As he sleeps, a railway passenger swats at flies, regretting her decision to return to the Dark Continent--and to her husband. On a faraway English riverbank, a jealous Felix Cobb watches his brother swim, and curses his sister-in-law-to-be. And in the background of the
world's daily chatter: rumors of an Anglo-German conflict, the likes of which no one has ever seen.

In An Ice-Cream War, William Boyd brilliantly evokes the private dramas of a generation upswept by the winds of war. After his German neighbor burns his crops--with an apology and a smile--Walter Smith takes up arms on behalf of Great Britain. And when Felix's brother marches off to defend British East Africa, he pursues, against his better judgment, a forbidden love affair. As the sons of the world match wits and weapons on a continent thousands of miles from home, desperation makes bedfellows of enemies and traitors of friends and family. By turns comic and quietly wise, An Ice-Cream War deftly renders lives capsized by violence, chance, and the irrepressible human capacity for love.

"Funny, assured, and cleanly, expansively told, a seriocomic romp. Boyd gives us studies of people caught in the side pockets of calamity and dramatizes their plights with humor, detail and grit."  --Harper's

"Boyd has crafted a quiet, seamless prose in which story and characters flow effortlessly out of a fertile imagination. . . . The reader emerges deeply moved." --Newsday