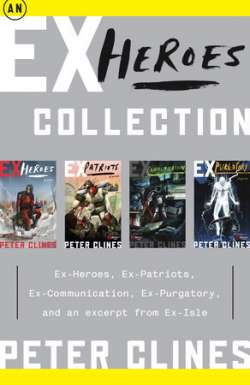 A genre-bending thriller series from Peter Clines, bestselling author of 14, and The Fold

In the days after civilization fell to the zombie hordes, a small team of heroes—including St. George, Zzzap, Cerberus, and Stealth—does everything they can to protect human survivors. Each day is a desperate battle against overwhelming odds as the heroes fight to keep the undead at bay, provide enough food and supplies for the living, and lay down their lives for those they’ve sworn to protect. But the hungry ex-humans aren’t the only threats the heroes face. Former allies, their powers and psyches hideously twisted, lurk in the shadows of the ruin that lies everywhere…and they may be the most terrifying threat of all.

Find out whether the heroes survive in this special omnibus edition, featuring the first four books in the series: Ex-Heroes, Ex-Patriots, Ex-Communication, and Ex-Purgatory, with an excerpt from the fifth book, Ex-Isle.