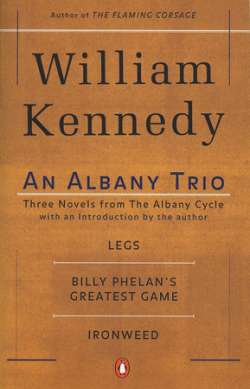 Legs inaugurated William Kennedy’s celebrated cycle of novels set in Albany, New York. True to both life and myth. Legs evokes the flamboyant career of the legendary gangster Jack “Legs” Diamond, who was finally murdered in Albany, and his showgirl mistress as they blaze a trail across the tabloid pages of the 1920s and 1930s.

The second novel in the Albany cycle depicts Billy Phelan, a slightly tarnished poker player, pool hustler, and small-time bookie, as he moves through the lurid nighttime glare of a tough Depression-era town. Full of Irish pluck, he works the fringes of Albany sporting life with his own particular style—until he falls from underworld grace.

In the Pulitzer Prize-winning novel, Ironweed, Francis Phelan, ex-ballplayer, part-time gravedigger, and full-time drunk, has hit bottom. Years ago he left Albany after killing a scab during a workers’ strike, and again after he accidentally—and fatally—dropped his infant son. Now, in 1938, Francis is back, roaming familiar streets and trying to make peace with ghosts of the past and present.