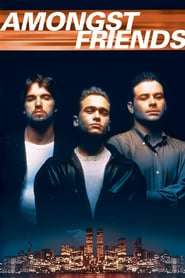 Director Robert K. Weiss gives a good accounting of himself in his first feature-length effort Amongst Friends. The film is set in an affluent Long Island neighborhood, the home of boyhood chums Patrick McGaw, Steve Parlavecchio, and Joseph Lindsey. With too much time on their hands, the kids turn to crime for "kicks". Events snowball into a climactic life-or-death drug deal, which threatens to end in disaster when one of the boys capriciously pulls a double cross. Barely released in 1993, Amongst Friends will probably get more play in future years thanks to the presence in the cast of Oscar-winner Mira Sorvino.