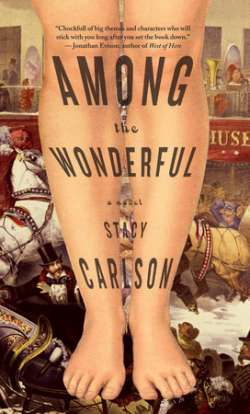 In 1842 Phineas T. Barnum is a young man, freshly arrived in New York and still unknown to the world. With uncanny confidence and impeccable timing, he transforms a dusty natural history museum into a great ark for public imagination. Barnum's museum, with its human wonders and extraordinary live animal menagerie, rises to become not only the nation's most popular attraction, but also a catalyst that ushers America out of a culture of glassed-in exhibits and into the modern age of entertainment.
In this kaleidoscopic setting, the stories of two compelling characters are brought to life. Emile Guillaudeu is the museum's grumpy taxidermist, who is horrified by the chaotic change Barnum brings to his beloved institution. Ana Swift is a professional giantess plagued by chronic pain and jaded by a world of gawkers. The differences between these two are many: one is isolated and spends his working hours making dead things look alive, while the other has people pushing against her, and reacting to her, every day. But they both move toward change, one against his will, propelled by a paradigm shift happening whether he likes it or not, and the other because she is struggling to survive. In many shapes and forms, metamorphosis is at the core of Among the Wonderful. Pursuing this theme, the book weaves a world where upper Manhattan is still untrammeled wilderness, the Five Points is at the height of its bloody glory, and within the walls of Barnum's museum, ancient tribal feuds play out in the midst of an unlikely community of marvels.