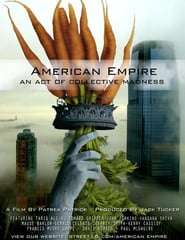 AMERICAN EMPIRE is an indictment on the country that has supposedly nurtured us, but is slowly destroying us. Beginning with the founding of the Federal Reserve our economy is controlled by a system of debt and inflation. It has become an economic empire that is destroying our planet and all its natural resources driven by a relentless need to amass money and power. How can we let this happen! How can we as a people, allow these so called officials get away with it? Who is benefiting and why? Their actions have affected our food, our health, and our very freedom! We have become both the enablers and sadly, the victims! This no-holds-barred documentary dares to lay bare the real truth behind the AMERICAN EMPIRE!

How To Watch American Empire