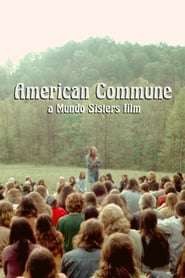 In 1970, hundreds of hippies followed Stephen Gaskin on a journey from San Francisco to Tennessee, where they founded a legendary commune known as the Farm. Within this self-sustaining society based on non-violence, vegetarianism and respect for the earth, members willingly took a vow of poverty, lived in converted buses, grew their own food and home-delivered babies. Born and raised in this alternative community, filmmakers and sisters Rena and Nadine return for the first time since leaving in 1985. Finally ready to face the past after years of hiding their upbringing, they chart the rise and fall of America's largest utopian socialist experiment and their own family tree. The nascent idealism of a community destroyed, in part, by its own success is reflected in the personal story of a family unit split apart by differences. American Commune finds inspiration in failure, humour in deprivation and, most surprisingly, that communal values are alive and well in the next generation.

How To Watch American Commune