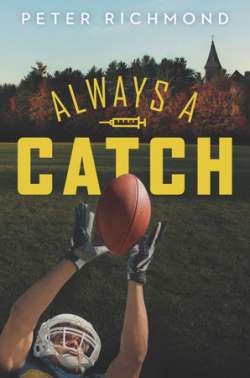 A ripped-from-the-headlines story about teens and steroids.

From a New York Times bestselling sports writer comes the story of one boy's quest to stay true to himself without letting down his team. Jack and his father have never seen eye to eye…until Jack’s dad gives him the chance to transfer to Oakhurst his junior year. His dad sees it as a way for Jack to get into a good college; Jack sees it as refuge from his dad.

Oakhurst is more than an escape—it's a chance for Jack to do something new, to try out for the football team. Once Jack makes the team, he’s thrust into a foreign world—one of intense hazing, vitamin supplements, monkey hormones and steroids. Jack has to decide how far he's willing to go to fit in—and how much he's willing to compromise himself to be the man his team wants him to be.

Perfect for fans of Mike Lupica and Tim Green.

Praise for ALWAYS A CATCH:

"Richmond has written an above-average story that will appeal to fans of the genre and authors, such as Mike Lupica and Tim Green."--School Library Journal

"A dynamic but thoughtful novel of self-discovery."--Kirkus Reviews

"Richmond skillfully delivers scene after scene of gridiron grit while maintaining Jack's wit and charm, and pulling off a winning story, on and off the field. Readers can only hope that this isn't Richmond's last young adult novel."--Publishers Weekly

"This is a quick and easy read that leaves the reader with hope for Jack’s future."--Library Media Connection