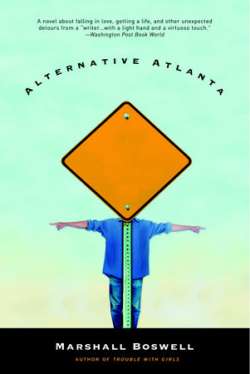 In a funny, poignant, wonderfully original debut novel, the author of the acclaimed short-story collection Trouble with Girls weaves a beguiling tale of fathers and sons, sons and lovers…and one unforgettable summer in a young man’s life–somewhere between a past he doesn’t understand and a future he’s not ready to live….

For thirty-year-old Gerald Brinkman, life in Atlanta in the year 1996–the summer of the Olympics–doesn’t feel half bad. Writing reviews of basement rock bands for an alternative paper, Gerald has carefully avoided getting a real job, while watching his old friends from grad school start careers, marriages, and affairs–often with each other. But in this one life-changing summer, something is about to happen that will shake Gerald out of his complacency forever.

Gerald’s father, his brilliant, vagabond, and utterly unhelpful father, wants to come and stay with him “for a while.” Ever since childhood, Gerald has tried to bury his relationship with his father under a life of carefully crafted wrong turns. And now Paul Brinkman has shown up with trash bags full of belongings, a medical crisis, and an unbearable confession to make. But Gerald knows one thing for sure: He doesn’t want to hear it. Try as he might to stop it, the future is bearing down on him. A job is being dangled in New York. A secret from his past is waiting to be revealed. An ex-girlfriend is suddenly sending mixed signals. And in one moment in one summer in the city of Atlanta, everything is about to change forever. When it does, Gerald is going to have a whole new vision of who he is, who his father and friends are, and what he must do next.

An exhilarating and touching novel about family and flirtations, growing up and letting go, Alternative Atlanta brilliantly captures a time of life when everything seems possible and impossible at the same time. It is a work of dazzling storytelling from a writer of immense gifts.