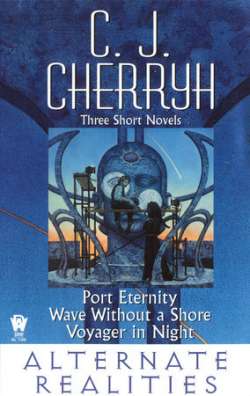 Port Eternity
Their names were Lancelot, Elaine, Percivale, Gawain, Mordred, Lynette and Vivien, and they were made people, clone servants who worked aboard The Maid, an anachronistic fantasy of a spaceship. They had no idea of their origins, from those old storytapes of romance, chivalry, heroism and betrayal, until a ripple in the space-time continuum sucked The Maid and her crew into a no-man’s land from which there could be no return, and they were left alone to face a crisis which their ancient prototypes were never designed to master…

Wave Without a Shore
Freedom was an isolated planet, off the main spaceways and rarely visited by commercial spacers. It wasn’t that Freedom was inhospitable, the problem was that outsiders—tourists and traders—claimed that the streets were crowded with mysterious blue-robed aliens. Native-born humans, however, denied that these aliens existed—until a planetary crisis forced a confrontation between the question of reality and the reality of the question…

Voyager in the Night
Rafe Murray, his sister Jillian, and Jillian’s husband Paul Gaines, like many other out-of-luck spacers, had come to newly built Endeavor Station to find their future. Their tiny ship, Lindy, had been salvaged from the junk heap, and fitted to mine ore from the mineral-rich rings which circled Endeavor. But their future proved to be far stranger than any of them imagined, when a “collision” with a huge alien vessel provided them with the oddest first contact experience possible!