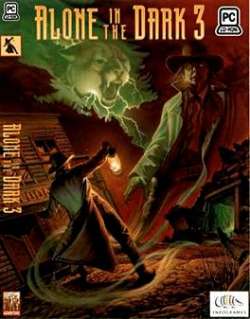 Alone in the Dark 3

Edward Carnby looked up. An Eagle was visible as it skimmed the light of the moon. Slaughter Gulch, never had a ghost town been so aptly named! The hot sierra wind blew open the swing door to the old saloon bar... A scream echoed through the night air... The old Navajo witch doctor was right. Emily Hartwood's life was at risk. A sudden crack... A Winchester being loaded... Carnby drew his six-shooter... Empty! The hell of his boot split into pieces. He had to find cartridges... Quickly! The moon began to cloud over. Carnby rushed out. His shoulder hit against a stone object. The statue of Jed Stone towered above him. He felt the second bullet tear into his back... Slowly, he tumbled into the darkness... Alone, Alone in the Dark!