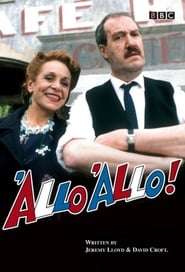 'Allo 'Allo! is a British sitcom broadcast on BBC One from 1982 to 1992 comprising eighty-five episodes. It is a parody of another BBC programme, the wartime drama Secret Army. 'Allo, 'Allo! was created by David Croft, who also wrote the theme music, and Jeremy Lloyd. Lloyd and Croft wrote the first six series. The remaining series were written by Lloyd and Paul Adam. The show tells the fictitious story of Rene Artois, a café owner in a small town in Nazi occupied France, who reluctantly helps the French resistance in their various schemes, the main of which is to help hide British airmen from the Germans. At the same time, he has to hide artefacts such as famous paintings for the German soldiers who frequent his café, while trying to keep his affairs with his waitresses secret from his wife. The comedy is a combination of wordplay, farce, slapstick, and sexual innuendo. Unlike most sitcoms, the episodes build on previous ones, requiring viewers to watch the series chronologically in order to fully understand the plot. In 2004, 'Allo 'Allo came 13th in Britain's Best Sitcom. A reunion special, comprising new material, archive clips and specially recorded interviews, was broadcast on 28 April 2007 on BBC Two.