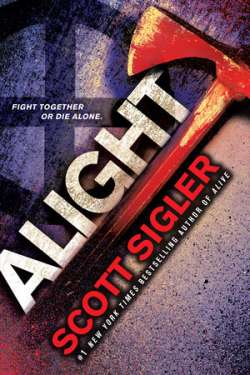 In Alive, Scott Sigler introduced readers to an unforgettable young heroine and a mysterious new world reminiscent of those of The Hunger Games, Divergent, and Red Rising. Now he expands his singular vision in the next thrilling novel of this powerful sci-fi adventure series.

“If it’s war they want, they messed with the wrong girl.”

M. Savage—or Em, as she is called—has made a bewildering and ominous discovery. She and the other young people she was chosen to lead awoke in strange coffins with no memory of their names or their pasts. They faced an empty, unknown place of twisting tunnels and human bones. With only one another to depend on, they searched for answers and found the truth about their terrifying fate. Confronted by a monstrous enemy, they vowed never to surrender—and, by any means, to survive.

The planet Omeyocan may be the sanctuary Em and her comrades seek. But the planet for which they were created turns out not to be a pristine, virgin world. Vestiges of a lost civilization testify to a horrifying past that may yet repeat itself. And when a new enemy creeps from the jungle shadows, Em and her young refugees learn there’s nowhere left to run. They face a simple choice: fight or die.

In the midst of this desperate struggle, their unity is compromised from within—and a dangerous zealot devoted to a bloodthirsty god moves to usurp Em’s command, threatening to lead them all down a path to violent doom.

“Suspenseful . . . [Alive] lives up to its hype, packing plenty of thrills. . . . A page-turner that whets the appetite for volume 2.”—Entertainment Weekly

“Fascinating and intriguing . . . a cross between Lord of the Flies and The Maze Runner and yet . . . so much more.”—Fresh Fiction

“Unstoppable and real, M. Savage is one hell of a heroine. Get ready to be left breathless.”—Kristin Cast, New York Times bestselling author of the House of Night series

“Sigler has created a wonderful and engrossing character in M. Savage. Strong and smart, but with the naïveté and misgivings of any teenage girl, she’s someone you’ll definitely want on your side when s**t hits the fan, which it most certainly does.”—Veronica Belmont, host of Sword & Laser

“The puzzle unfolds masterfully, right down to the last page.”—Phil Plait, PhD, author of Bad Astronomy