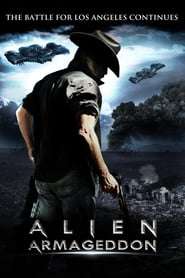 For years, UFO sightings have been documented around the world. What were once mere sightings have now become brutal attacks of epic proportions. As the human race faces total annihilation with every major city destroyed only Los Angeles remains. Left with the task of saving humanity from extinction, a group of cowboys is the world s last stand in this Alien Armageddon.