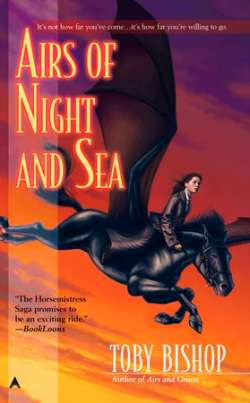 Airs of Night and Sea

Bonded with a winged foal by accident, country girl Larkyn Hamley transformed herself into a strong, willful young woman at the Academy of the Air. Now, her most difficult challenge is upon her. And in this test, failure will be fatal.

Darkness is overtaking the Duchy of Oc. Driven by jealousy and madness, Duke William is determined to found his own flying school, where the valuable flying horses of Oc will learn to bond with well-born young men . . . instead of arrogant women. Once he has control of the air, nothing will stand in his way—not even the soon-to-be outdone horsemistresses.

At the Academy, Lark and her fellow flyers struggle to learn their craft while under William's yoke. His spies and soldiers are everywhere. Worse still is the absence of their beloved instructor, Mistress Philippa, who has been forced into hiding.

But when the Academy of the Air is threatened, Lark and her beloved Black Seraph must gather all of their allies from the air to the ground. For if they do not soar now, none will ever see the skies again.