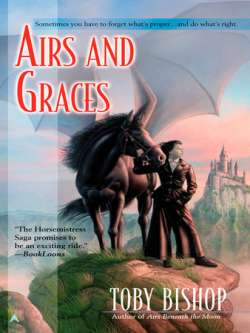 Since bonding with a winged foal by accident, Larkyn Hamley has risen from her position as a wild country girl to become one of the finest students at the Academy of Air. But not everyone has her special gift, a fact that one nobleman simply refuses to accept gracefully.

The free-spirited Larkyn has found her place in the Duchy of Oc. She’s favored student of Mistress Phillipa, and has mastered riding her flying horse, Black Seraph.

Elsewhere, things are growing far more turbulent. Lark’s old enemy, Duke William, is the new ruler of Oc. Obsessed with the desire to ride a winged horse himself, his growing madness leads him to ignore his traditional duties to protect the Duchy—leaving the coast open to Aesklandish raiders who strike at will.

Now, as Oc is ravaged by chaos, Lark finds herself caught in a desperate battle to save her Academy from the Duke, her land from the savage Aesk, and her own life from a bloody end.