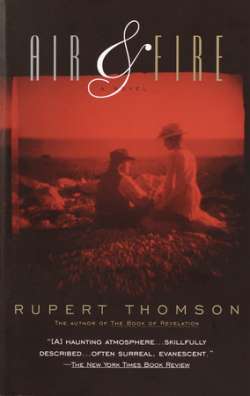 In the 1890s, “Lower California” is a land adrift, peopled by Indians and half-breeds, and now by the French as well. The Indians are indifferent to Western notions of time and industry. The French, on the other hand, are sufficiently meticulous to import 2,348 pieces of cast iron to the desolate mining town of Santa Sofia, there to be assembled into a church under the supervision of a disciple of the renowned Gustave Eiffel.

This wildly impractical venture is the starting premise for this new novel by the author of The Five Gates of Hell, a writer the Washington Post has called “a virtuoso of the hallucinatory.” As Theophile Valence attempts to re-create Paris in an outpost of hell—and his wife, Suzanne, arouses the doomed passions of an American prospector and a Mexican army officer—Air and Fire fuses adventure and romance into a magnificent tale of conflicting passions and cultures.

“Absorbing . . . More than anything else, it is the prose oin which Thomson evokes [his character’s] mental life that, with the concentration of a magnifying glass, kindles this novel’s fire.”—The New Yorker