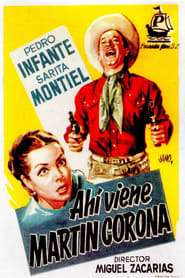 Martin Corona, player and womanizer, defends the underprivileged, the poor and the needy. He will have to defend a Spanish girl and her servant from the clutches of the villainous of the town. Not only will he have to fight the bad guy, but against the pride of the girl who initially believes that he is the bad character and distrusts him. She was very proud to put him at her feet, but there was a problem, Martin Corona was due more to his people than anyone and she was not willing to risk losing it, so before marrying him, made him swear he would not intervene In other problems.