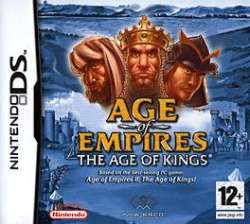 Age of Empires: The Age of Kings

Age Of Empires: The Age Of Kings is a portable version of one of the best-selling RTS games ever! You'll command five different civilizations, as you move from the Dark Ages through the Middle Ages, with one goal in mind: Domination of the known world. New combat advisor gives you advice on campaign strategies Gain empire points to unlock maps & units and improve emperor rank Multiplayer scenarios allowing up to 4 players to battle each other wirelessly.