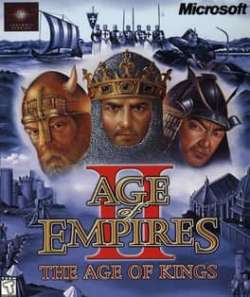 Age of Empires II: The Age of Kings

Take control of a powerful civilization. Lead them through 1000 years of the Middle Ages to riches and greatness. Will you Intimidate the world into following you by using military force? Rule the world with honor and nobility by using commerce and diplomacy? Or Underhandedly seize power through conspiracy, deception and regicide? There are many paths to power, there can only be one ruler! Features: * Travel through time as your civilization evolves from the Dark Age to the Imperial Age * Construct a rich and thriving empire by trading with allies * Control and lead military forces with tactical commands * Go into battle at the side of famous heroes such as Joan of Arc, Barbarossa or William Wallace