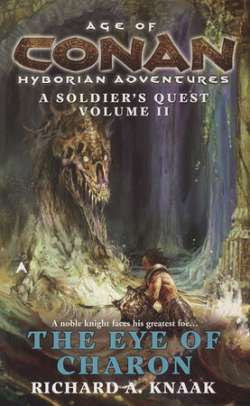 Age of Conan: The Eye of Charon

Nermesa Klandes abandoned a life of opulence to join the Aquilonian army, and serve the great King Conan. Earning rank and respect through his courage and loyalty, he was made an officer in the elite warrior band known as the Black Dragons.

But when his first assignment ends in bloodshed, it marks the beginning of the young knight’s most perilous test. Caravans from Aquilonia’s neighbors are being set upon and slaughtered by an unknown enemy. Assigned to ride with a caravan, Nermesa is pulled into a diabolical plot of dark magic and demonic powers that threatens to shake Aquilonia to its very foundations—and bring King Conan to his knees...