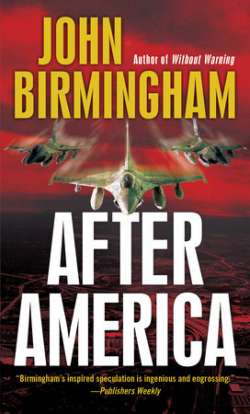 The world changed forever when a massive wave of energy slammed into North America and wiped out 99 percent of the population. As the United States lay in ruins, chaos erupted across the globe.

Now, while a skeleton American government tries to reconstruct the nation, swarms of pirates and foreign militias plunder the lawless wasteland where even the president is fair prey. In New York City, armies of heavily armed predators hold sway—and hold off a struggling U.S. military. In Texas, a rogue general bent on secession leads a brutal campaign against immigrants. And in England, a U.S. special ops agent enters a shadow war against a deadly enemy who has made the fight personal. While the president ponders a blitz attack on America’s once greatest city, the forces of order and anarchy wage all-out war for postapocalyptic dominance—and a handful of survivors must decide how far to go to salvage whatever uncertain future awaits . . . after America.