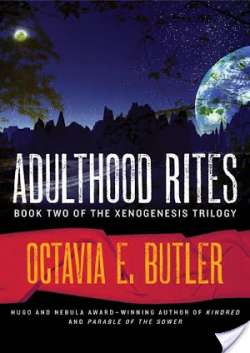 The futures of both mankind and an alien species rest in the hands of one hybrid son in the award-winning science fiction author’s masterful sequel to Dawn. Nuclear war had nearly destroyed mankind when the Oankali came to the rescue, saving humanity—but at a price. The Oankali survive by mixing their DNA with that of other species, and now on Earth they have permitted no child to be born without an Oankali parent. The first true hybrid is a boy named Akin—son of Lilith Iyapo— and to the naked eye he looks human, for now. He is born with extraordinary sensory powers, understanding speech at birth, speaking in sentences at two months old, and soon developing the ability to see at the molecular level. More powerful than any human or Oankali, he will be the architect of both races’ intergalactic future. But before he can carry this new species into the stars, Akin must decide which unlucky souls will stay behind. At once a coming-of-age story, science fiction adventure, and philosophical exploration, Butler’s ambitious and breathtaking novel ultimately raises the question of what it means to be human. This ebook features an illustrated biography of Octavia E. Butler including rare images from the author’s estate.