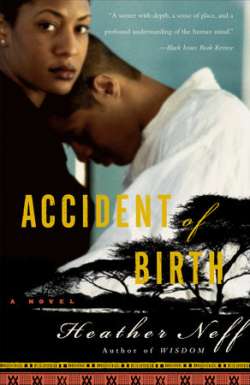 Reba Freeman has loved two men in her life. Her current husband, Carl, has supported her through their twenty-year marriage and given her all the material wealth a suburban wife could hope for. Reba is comfortable, if not necessarily content, in her life with Carl and their blossoming teenage daughter, Marisa, until she learns that her first love and first husband, Joseph Thomas, has been detained by the World Court of Human Rights.

Joseph, a peaceful, gifted Liberian student, had dreams of returning to his native land and educating his people for the betterment of his country. Reba respected his strength and wanted to support his cause, but didn't accompany Joseph to Liberia after graduation due to mysterious circumstances. Now, twenty years later, she must decide if finding out what has happened to her first husband is worth the risk of losing Carl and turning her comfortable world inside out.

Alternating between present-day action and a series of flashbacks, Accident of Birth creates an intricate tapestry of suspense, drama, and romance, while also looking at the moral and cultural differences between African Americans and Africans. Neff boldly exposes the rift between American comforts and the traumas of the world we choose to ignore, creating a moving and memorable story of courage and hope that readers will talk about for a long time.