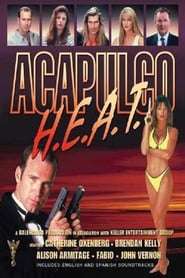 Acapulco H.E.A.T. is a 1993 syndicated television series that followed the Hemisphere Emergency Action Team [H.E.A.T.], a group of top-secret agents based in Acapulco, Mexico and recruited by C-5, a secret government coalition, to fight terrorism and international crime. The team kept a low profile, by acting as models and photographers who represented a Beach Fashion enterprise.