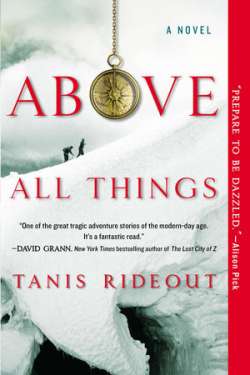 1924. George Mallory is arguably the last great British explorer, having twice tried—and failed—to conquer Mount Everest. The mountain has haunted him, but his attempts have captivated the hearts of a nation desperate to restore its former glory after World War I. Yet George has sworn to his wife, Ruth, that he will not mount a third attempt. He will remain with her and their three children instead of again challenging the unreachable peak.

Then, one afternoon, Ruth reads a telegram addressed to George: “Glad to have you aboard again.” And with this one sentence, the lives of the Mallorys, and the face of the nation, are irrevocably changed.

A beautifully rendered story about the need for redemption and the quest for glory, Above All Things is a captivating blend of historical fact and imaginative fiction. It is a heartbreaking tale of obsession, sacrifice, and what we do for love and honor.