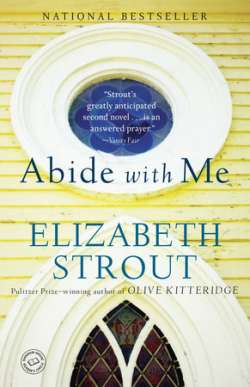 In her luminous and long-awaited novel, bestselling author Elizabeth Strout welcomes readers back to the archetypal, lovely landscape of northern New England, where the events of her first novel, Amy and Isabelle, unfolded. In the late 1950s, in the small town of West Annett, Maine, a minister struggles to regain his calling, his family, and his happiness in the wake of profound loss. At the same time, the community he has served so charismatically must come to terms with its own strengths and failings—faith and hypocrisy, loyalty and abandonment—when a dark secret is revealed.

Tyler Caskey has come to love West Annett, “just up the road” from where he was born. The short, brilliant summers and the sharp, piercing winters fill him with awe—as does his congregation, full of good people who seek his guidance and listen earnestly as he preaches. But after suffering a terrible loss, Tyler finds it hard to return to himself as he once was. He hasn’t had The Feeling—that God is all around him, in the beauty of the world—for quite some time. He struggles to find the right words in his sermons and in his conversations with those facing crises of their own, and to bring his five-year-old daughter, Katherine, out of the silence she has observed in the wake of the family’s tragedy.

A congregation that had once been patient and kind during Tyler’s grief now questions his leadership and propriety. In the kitchens, classrooms, offices, and stores of the village, anger and gossip have started to swirl. And in Tyler’s darkest hour, a startling discovery will test his congregation’ s humanity—and his own will to endure the kinds of trials that sooner or later test us all.

In prose incandescent and artful, Elizabeth Strout draws readers into the details of ordinary life in a way that makes it extraordinary. All is considered—life, love, God, and community—within these pages, and all is made new by this writer’s boundless compassion and graceful prose.

Praise for Abide with Me

“Superb . . . a shimmering tale of loss, faith, and human fallibility . . . You feel yourself in the hands of a master storyteller.”—O: The Oprah Magazine

“Deeply moving . . . In one beautiful page after another, Strout captures the mysterious combinations of hope and sorrow. She sees all these wounded people with heartbreaking clarity, but she has managed to write a story that cradles them in understanding and that, somehow, seems like a foretaste of salvation.”—The Washington Post

“This lovely second novel confirms Strout as the possessor of an irresistibly companionable, peculiarly American voice: folksy, poetic, but always as precise as a shadow on a brilliant winter day.”—The Atlantic Monthly

“Graceful and moving . . . The pacing of Strout’s deeply felt fiction about the distance between parents and children gives her work an addictive quality.”—People (four stars)