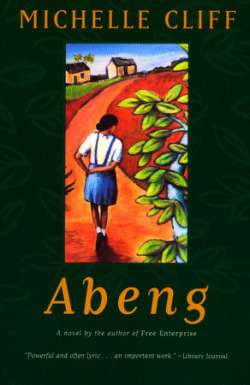 Ever since Abeng was first published in 1984, Michelle Cliff has steadily become a literary force. Her novels evoke both the clearly delineated hierarchies of colonial Jamaica and the subtleties of present-day island life. Nowhere is her power felt more than in Clare Savage, her Jamaican heroine, who appeared, already grown, in No Telephone to Heaven. Abeng is a kind of prequel to that highly-acclaimed novel and is a small masterpiece in its own right. Here Clare is twelve years old, the light-skinned daughter of a middle-class family, growing up among the complex contradictions of class versus color, blood versus history, harsh reality versus delusion, in a colonized country. In language that surrounds us with a richness of meaning and voices, the several strands of young Clare's heritage are explored: the Maroons, who used the conch shell—the abeng—to pass messages as they fought a guerilla struggle against their English enslavers; and the legacy of Clare's white great-great-grandfater, Judge Savage, who burned his hundred slaves on the eve of their emancipation. A lyrical, explosive coming-of-age story combined with a provocative retelling of the colonial history of Jamaica, this novel is a triumph.