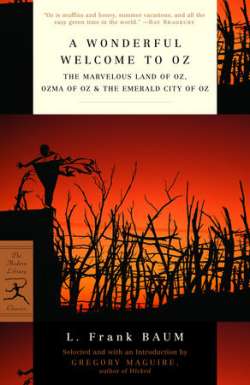 A Wonderful Welcome to Oz

For more than a century, L. Frank Baum’s kingdom of Oz and its delightful denizens have enchanted readers of all ages. In this illustrated Modern Library edition, the bestselling novelist and children’s book writer Gregory Maguire takes readers on a guided tour of Oz, gathering and introducing us to three of Baum’s beloved stories:
The Marvelous Land of Oz, the sequel to The Wizard of Oz, is the adventure-packed tale of a Gillikin boy named Tip who flees Old Mombi the witch in search of the Emerald City.
Ozma of Oz, set mainly in the strange land of Ev, features the clever and beautiful new ruler of the Emerald City, as well as Dorothy of Kansas, the mechanical marvel Tik-Tok, and the dreaded Nome King.
The Emerald City of Oz recounts Dorothy’s trip to Oz with her Aunt Em and Uncle Henry, and the Nome King’s terrible plot against the kingdom.